Skip to main content
Gamze Elibol
I am incredibly happy and very proud. It makes me very happy that my voice is heard in such a big project after 20 years. This is my most precious prize. 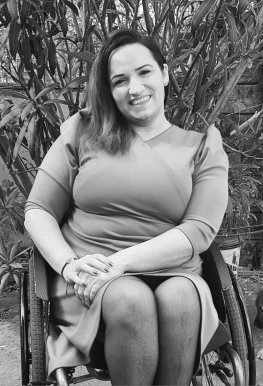 The winner in Arts, Culture and Sports is theatre director, Gamze Elibol from Turkey.

Gamze Elibol is a trailblazing theatre director from Turkey whose impact goes way beyond the plays and musicals she stages. The significant barriers to art and culture faced by people with disabilities – including herself –inspired Gamze to act, literally.

In 2002, she created the Art, Culture and Education Center for People with Disabilities (TEKSEM).

Gamze has staged over 500 plays and written eight musicals to raise awareness on topics including breast cancer and violence against women. Some of her work features self-designed puppets in wheelchairs. She is the first actor and female director with a disability in Turkish State Theatres.

During her early childhood she was repeatedly discriminated against by her teachers because of her disability. After being rejected from the renowned ‘Conservatory’ in 2000 she instead began work as a writer at a theatre company.

Gamze now fights for the rights of people with disabilities by raising her voice and constantly advocating inclusion and accessibility.

Gamze has a powerful social media presence and continues her work and advocacy through many prominent platforms, including her own TEDTalk.

"Gamze is not a quitter, she had the desire to prove people wrong, she didn’t believe that her disability could stop her from achieving her dreams, instead, she saw her disability as a challenge that opened up unique opportunities to many in need. Although she faced hard things, she realized that they can’t stop her but they can only call out her courage and strength."
(Sara Minkara - Jury Member)