Skip to main content
Musola Catherine Kaseketi
Look at your obstacles as your motivations to achieve your goals. Ignore all the negative intimidating voices. Embrace the positive, empowering words because you are just like any other woman. 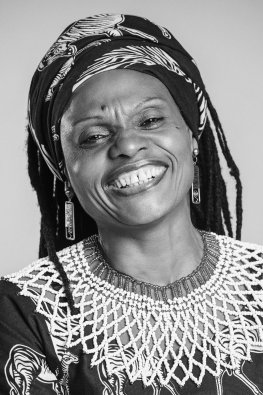 As a young child, a medical error paralysed one of her legs and she has mobility difficulties as a result. Initially she trained as a filmmaker in South Africa, then she studied human rights advocacy and cinema to enhance her skills so she could use the power of film as a tool. She was subsequently a disability equality facilitator with the International Labour Organisation,

Her first film, Suwi ("Faith"), which she wrote, directed and produced, was released in 2009, and was screened all over Africa, as well as in several European countries. Shortly after the release of Suwi, Kaseketi set up the Women and Girls with Disability Rights of Zambia formerly known as Pachibwanse Corner(Women's Meeting Place), a project to empower and improve the lives of women and girls with disabilities. Many of her films and documentaries address the social issues affecting women and girls with disabilities. In 2016 she hosted the first Gender Based Violence Conference against women with disabilities.

She is also the founder of Vilole (View) Images Productions (VIP), a nonprofit foundation which educates young Zambian filmmakers, began Zambia's first international film festival, Shungu Namutitima (Smoke That Thunders), and is an Advisor for the Zambia National Association for Women with Disabilities.

Zero Project Conference 2019
Speaker at the session on: Storytelling – Good practice in social media, video and movies
Session Description: This session explores the good and bad of telling disability-related stories via social media, videos, and movies.
Good example video clips will be played on large screens, with a panel of experts providing analysis and insight following each clip.

“I was inspired by her story, her strength and perseverance and above all for her educational spirit”
(Jury member Mariam Doumbia)