Three exceptional women have been chosen as winners of the Her Abilities Award 2019. The Award is the first worldwide accolade celebrating the achievements of women with disabilities across the board. It is split into three categories: Arts, Culture and Sport; Rights and Health and Education.

Dr Liisa Kauppinen, from Finland, has won in the Rights category. She has a three decade-long record promoting the human rights of deaf people throughout the world – a “true disability rights hero”!

And in Health & Education, the winner is Vietnamese businesswoman, disability pioneer and “changemaker”, Nguyen Thi Van.

Her Abilities is the first global award honouring the achievements of women with disabilities, celebrating greatness in their life and field of work. It aims to tell those stories which are too seldom told.

By highlighting their achievements, disability and development NGO Light for the World and the co-founder of the Award – Ethiopian disability rights activist, Yetnebersh Nigussie – want to celebrate success, break down barriers in public perception, and build a strong network of women committed to the further pursuit of justice, equality and excellence.

The jury for the Her Abilities Award is made up of highly influential women with and without disabilities from different fields of life; from Haben Girma, the first Deafblind person to graduate from Harvard Law School, to Paralympic champion Susannah Rodgers: https://www.her-abilities-award.org/jury.

“Women with disabilities so often are marginalised, but the Her Abilities Award is making sure each and every voice is heard and empowered to bring greatness and light into the world.” - Sara Minkara, Her Abilities jury member & founder, Empowerment Through Integration

The founder of the Award is Right Livelihood Award winner, Yetnebersh Nigussie, whose motto is: “Let’s focus on the 99 abilities and not the one disability!”: https://www.light-for-the-world.org/yetnebersh-nigussie.

Further info on the winners

“I was shocked and pleased to have been chosen for this Award. There are so many groundbreaking and fearless disabled women doing important work globally. It is an honour to be highlighted in such a competitive field.”

Born in New Jersey to Palestinian immigrant parents, Zayid is transforming views within the entertainment industry about the role of disabled women.

During her early acting years, Zayid was repeatedly turned down for roles, because of her disability. She chose to pursue stand-up comedy instead and soon began appearing at top clubs in New York as well as touring worldwide.

Zayid’s TED Talk “I have 99 problems… palsy is just one” was one of the most viewed TED Talks of 2014. It has over ten million views and counting.

Maysoon has dedicated her life to mainstreaming disabled students into the worldwide education system with a special focus on Palestinian refugees and students denied access throughout the USA.

“I hope this [Award] will inspire and encourage women with disabilities around the world to act for their rights, and for better living conditions at the grassroot, national and international level.”

Dr. Kauppinen became the first woman President of the World Federation of the Deaf in 1995, having previously served as its Vice-President and Secretary, and also as Executive Director of the Finnish Association of the Deaf.

Dr Kauppinen's human rights work hasn’t focused exclusively on the rights of deaf people, but also on rights of women and women with disabilities. Her work advocating for gender equality has extended to projects with communities in Africa, Asia, Latin America, the Balkans and Russia.

She was also instrumental in securing references to sign languages and the identity of deaf people within the Convention of the Rights of Persons with Disabilities, and is a long-time WFD consultant for the United Nations.

“Receiving this Award is a great motivation for me…I also believe (it) inspires others.”

Van is co-founder of the nonprofit Will to Live Centre, created with the aim of generating an equal working environment for all. The organisation gives free IT, English language and vocational training to disadvantaged students in Vietnam. More than 1000 people with disabilities have benefited from this crucial educational and career support. In addition, she runs social enterprise Imagator, which employs more than 80 people, half of whom have a disability.

In 2015, Van created the first ever fashion catwalk show for women with disabilities in Vietnam. “I am beautiful. You too!” aims to promote a perception of beauty stemming from diversity and difference. 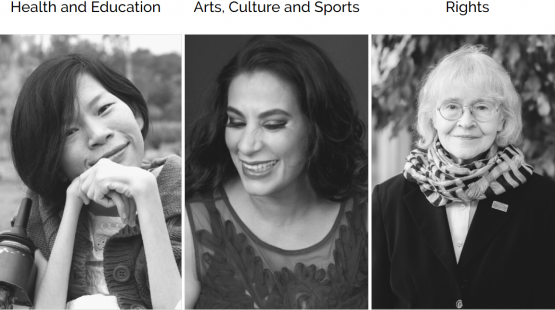