We reached out to Musola to see what had taken place since her visit to Vienna, February 2019 where she attended the Zero Project Conference and received the Her Abilities Award. These are the words Musola shared with us:

Locally, people have now taken a different approach in how they look at my work. They have come to realize that there has not been appreciation of my work on a local level despite my contributions to both the disability and film industry. This change of mindset gives me confidence that probably there may be more local opportunities soon.

Two great opportunities I can mention are:

I was away for school for 6 months and returned in December when holidays were just beginning. Officially, I came to the office after the trip to Austria and found it very challenging to run a non-profit organization that has no a full-time funder but survives on finding projects like making documentaries for various people to pay staff and bills.

Being in a country where the film industry is not developed and also being the first female professional filmmaker also comes along with its own complications. So I was a bit scared because it's like starting afresh looking for projects to sustain community work. But after being a Her Abilities Award recipient I feel confident that soon other opportunities will come.

My work is mostly voluntary and people do not know that because I work with or without money when I see a need. Only my family and very close friends know what is behind my smile.

Now I am hopeful with this award will help me find a funder and purchase equipment for my work for sustainability. I am confident more opportunities will come and I will make sure to keep you posted. 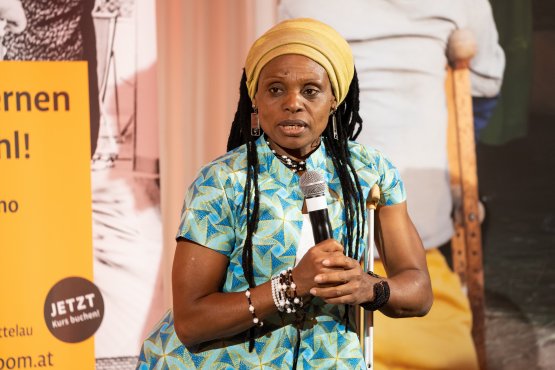